Comparison of the Effect of Two Interdental Cleaning Devices Around Implants on the Reduction of Bleeding: a 30-day Randomized Clinical Trial

To compare the efficacy of a Waterpik® Water Flosser to string floss for implant patients.

Subjects were randomized into two groups; Group One used a manual toothbrush and a Waterpik® Water Flosser with the Plaque Seeker® Tip (WF) and Group Two used a manual toothbrush and string floss (SF). There were twenty two implants in each group and the primary outcome was the reduction in the incidence of bleeding on probing. Subjects brushed twice a day and used either the WF or SF once a day.

There were no differences between the groups at baseline. At thirty days, eighteen of the twenty two (81.8%) implants in the WF group showed a significant reduction in BOP compared to six of the 18 (33.3%) from the floss group. The WF group experienced 145% better reduction in gingival bleeding around implants vs. the string floss group (p=0.0018).

The Waterpik® Water Flosser is significantly more effective than string floss for improving gingival health around implants and is safe to use. 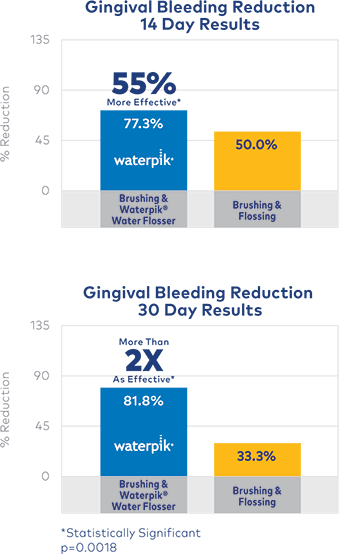 Back To Clinical Research Listing