Bleeding Gums, It's A Problem

Do you ever see pink on your toothbrush or in the sink after you spit?

Why You Experience Bleeding Gums

Bleeding gums are an indication that your gum tissue is inflamed. Plaque that you may have missed during toothbrushing contains bacteria. Over time, it causes rednesss and inflammation.

Bleeding gums are a sign that your body has an infection and consequent inflammation. If caught early, in the gingivitis stage, it is reversible through good oral hygiene done daily at home. Left untreated, it may progress to periodontal disease, where there is a loss of tissue supporting bone and potentially tooth loss.

Periodontal disease is also treatable, but it generally requires specific in-office treatment from your dentist and/or dental hygienist.

What Should I Do If My Gums Are Bleeding?

Unless you are extremely dexterous, flossing with string is often challenging. A great alternative is the Waterpik® Water Flosser. It has been shown to be up to 2x as effective as dental floss at reducing bleeding and up to 29% more effective at reducing plaque.

How Can I Prevent Bleeding Gums?

The best way to prevent bleeding gums is to practice good oral hygiene each and every day, and brushing is not enough.

For the best of brushing and flossing in one product, the Waterpik® Complete Care features both the Waterpik® Water Flosser and a separate electric toothbrush.

Healthy gums don't bleed. If you see pink when you brush your teeth, it's time to improve your oral health with better flossing and brushing. A few simple changes in your routine and the right tools can make all the difference! 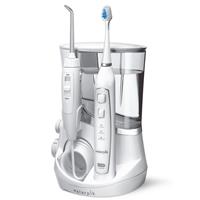